HOME ＞ NEWS ＞ Report on the First Preliminary Round 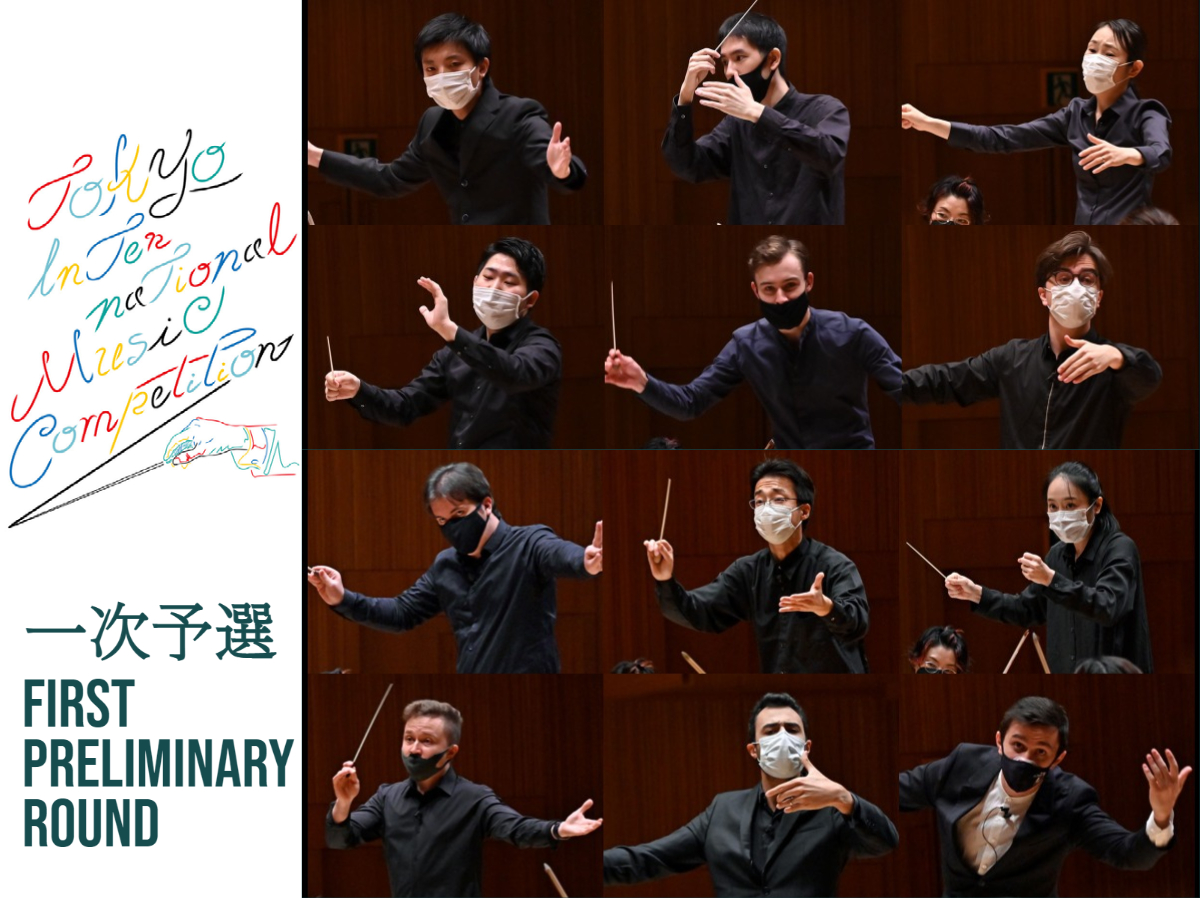 Report on the First Preliminary Round

Report on the First Preliminary Round


The First Preliminary Round was held for the two days on September 27 and 28 at the Tokyo Opera City Concert Hall without spectators due to the COVID-19 pandemic state of emergency declaration in place.

There were 14 applicants selected for the first preliminary round, but two of them declined, and therefore 12 contestants participated; including two females, six from Japan, two from Russia, one each from the UK, Germany, Brazil and France.  It is remarkable that they have gathered from various countries around the world despite the strict immigration restrictions including the 14-day voluntary quarantining because of the COVID-19 pandemic.

Six contestants conducted an orchestra for each of the two days, 27th and 28th. They met with the Tokyo Philharmonic Orchestra for the first time and conducted Symphony No.2 by Beethoven. When conducting, they wear masks and put a microphone on (so that their communication with the orchestra could be heard from the floor.) Each of them was given 25 minutes to conduct designated sections of the four movements of the symphony. They may stop conducting to give directions to the orchestra or redo the same part to do it right. Not only the performance but the way and the focus of their rehearsing were also judged.

It should be noteworthy that the high quality of the performance and the cooperative attitude exhibited by the Tokyo Philharmonic Orchestra (with Akihiro Miura as concertmaster) greatly contributed to the fair judging throughout the first preliminary round. TPO showed stable performance for the first contestant and continued performing Symphony No. 2 of Beethoven in a fresh manner through to the last contestant (12 rounds in total!)


Comments on the contestants who passed the first preliminary round


Out of 12 contestants who participated in the first preliminary round seven of them will move on to the second preliminary round. All of them are in their 20’s. In addition to how they conduct and communicate with the orchestra, their interpretation and reproduction of a classical music by Beethoven, specifically his Symphony No. 2, were also judged.

Let’s look back on their conducting in the order of their performance at the first preliminary round.
The first contestant who stood on a podium was Koji Ishizaka. He conducted the entire designated part from the beginning of the first movement thought to the end nonstop, so smoothly that I wished I could listen till the end of the movement. Ishizaka’s conducting was natural, yet making a clear contrast in dynamics. He seemed to listen to and appreciate the orchestra’s sounds very much. He also communicated well to the orchestra his idea about light and soft notes.

Satoshi Yoneda, age 25, was bold in conducting and yet his interpretation was very well thought out. He had a comprehensive view on the music but at the same time gave specific instructions, for example, to be more affectionate to a minor note. He was specific about trilling at the beginning of the fourth movement, and also tried to represent Beethoven’s intended surprise.  His musical style was well reflected in his conducting.

Bertie Baigent from the UK had a drive since the first movement, with a sense of speed suitable for the music. There was no stagnation during the second movement in larghetto with the beat properly felt. It was good that he moved forward in the third movement without adhering too much to details. The fourth movement was performed at a nice tempo. He makes clear contrast in the dynamics of sounds, presenting a contemporary style, so to speak, of Beethoven music performance.

Luka Hauser, age 23, is from Germany. His conducting is not yet well sophisticated, but is able to express substantial contents of the music. He uses his left hand very well. The intensity of the sound was very clear with a nice tempo. He sought sounds like chamber music in the second movement.

José Soares from Brazil is also 23 years old, the youngest among those who passed the first preliminary round. His relaxing and rhythmical conducting produces lyrical style of playing. In the second movement, however, he conducted boldly for grand cantabile, with a nice tempo for the latter half of the movement. It was nice that he sang when instructing the orchestra.

Samy Rachid from France is a cellist-turned-conductor. He won first prize in the ARD International Music Competition Munich 2016 as part of the Arod Quartet. He is very tall and does not conduct too much in detail. It seemed that he does not yet have a large vocabulary of conducting.

The last contestant for the first preliminary round was Mikhail Mering from Russia, a clarinet-player-turned-conductor. Beautiful and mellow sound-making. While he sometimes showed a little awkward movement in conducting, he was full of motivation for expression.